So Blatter and his corporate cronies fly off to China and make a big thing of the fact that soccer is actually very much part of their culture, because they were the very folks that invented it. 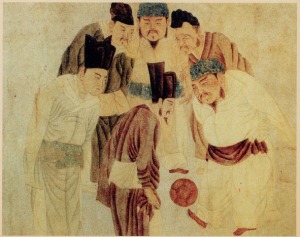 FIFA has stated that football started in China. And although that claim has as much to do with commercial interests as it does with historical accuracy, it is hard to find any civilization on the planet that has older references to people kicking spherical objects for amusement.

Cuju, (‘kickball’) is mentioned in texts that date back more than 2,500 years, and for two millennia it and similar games, such as baida, were a frequent element of Chinese art and literature. The exact nature of the game varied in different times and places. The Han Dynasty had a six-a-side game with moon shaped goals and a square wall, the Tang played on either side of a net and vied to kick the ball through a hole in the middle, and the Song game was more about juggling the ball with the feet. 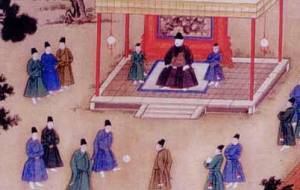 Despite claims to the contrary, it’s doubtful whether cuju was really anything like modern football at all, other than the fact that the feet were used to kick the ball. And it’s even less likely that cuju could have had any influence on the way ball games were played in Europe, where early forms of football already existed long before any meaningful interaction with the Far East.

And the Chinese were not alone in playing ball games with their feet. The Koreans played something called chukguk, and the Japanese tradition of kemari still exists today. Both these games are at least 1,500 years old and probably much older still, and generally involve players working together to keep a ball off the ground using nothing but their feet – basically keepy-uppy. It is very probable that the Chinese, Korean and Japanese ball games had a common history.

Southeast Asia also has similar traditions. Malaysia’s sepak raga dates back to at least the 14th century. Visiting Englishmen observed in 1775 how “ten or twelve persons make a ring and toss the ball from one to another. Sometimes they kick it with the foot, sometimes with the shoulder, and often with the knee, keeping it up as long as they can.” The Thai game of takraw was basically the same thing, as was the Filipino sipa, the Vietnamese câu mây and many other games played throughout the region. It wasn’t until 1965 that a hybrid game was created out of these, called sepak takraw, a breathtaking game best described as volleyball played with the feet and that is now one of the most popular spectator sports in that part of the world. 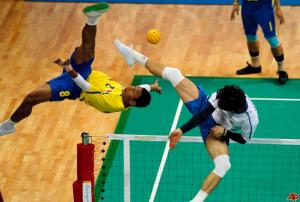 The addition of a net to sepak takraw was probably inspired by western sports brought to the region by the French and English, and as is the case with cuju, it is unlikely that there was ever much or even any cultural influence in the other direction. Rather than the ball games of the Far East influencing European football, what these games really tell us is that in almost every civilization the world has ever known, ball games of some sort were a popular and ancient pastime.

Click here to read the full chapter on the ancient ball games of the Far East in Mike Roberts’ The Same Old Game.