In the past, a white calf was butchered in the middle of the square as a prize for the winning team, but these days, to protect the squeamish and any veggie tourists from having to witness any bovine blood being spilt, the meat is readily provided in steak form and washed down with plenty of Chianti wine. 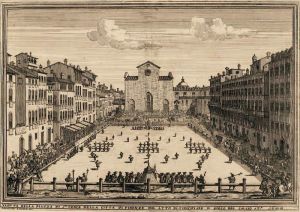 It is often said that the football played in medieval Italy was descended from Roman ‘harpastum’. Although likely, we cannot say this for sure, but what was known as ‘calcio’ was a big deal from at least 1490, when it was first recorded being played on the frozen River Arno in Florence, the same place where, in 1530, the annual game famously went ahead despite the city being under siege by the Medici.

Although football was probably played by all walks of Florentine society, the specular games in livery played in the Piazza Santa Croce were only played by the nobility and were preceded by much pomp and ceremony. Then, as Richard Lassels wrote in 1670, “the ball. or ballon, is thrown up in the midst between them and to it they go with great nimbleness, sleight and discretion … the side which strikes the ballon over the rails of the other side wins the day.” Interestingly, he felt that it was “a play something like our football, but they play with the hands”, while a 1611 dictionary entry for ‘calcio’ called it “a kind of play used in Spaine and Italie like unto the play at ballone.” It was clearly a violent game that bore much in common with rugby, and may well have played a part in its origin at a time when there was much cultural and religious exchange between Italy and Britain.

Calcio died out in the 18th century, but when football returned to Italy in the 1890s in the form of soccer clubs formed by British and Swiss immigrants, the Italians were quick to claim the game as their own. In 1909 the national governing body was renamed the Federazione Italiana Gioco Calcio, and ‘calcio’ remains the Italian word for soccer today.

Under Mussolini and the fascists, however, football was considered a foreign import, and from 1928 was replaced, in similar fashion to what the GAA had done in Ireland, by Augusto Turati’s new sport, ‘volata’, a combination of soccer and rugby that despite being an artificial invention was proclaimed as the “truly Italian sport.” The project was an embarrassing disaster, and was abandoned a year before Italy hosted and won the 1934 FIFA World Cup and a new era when the fascists embraced rather than rejected soccer.

There was more success with the venture in 1930 to celebrate the anniversary of the famous match of 1530 with a recreation of it in Florence’s main square, including all of the pre-match pageantry in period costumes. It was so successful that ‘calcio storico’, a spectacularly violent game that’s rather like rugby without the rules, has since become one of Italy’s finest annual sporting traditions.