Unperturbed by any of this, the scene ends with the Knight picking up his battered head, placing it under his shoulder and walking off. A cooler reaction from an unfairly penalised footballer you will be hard pressed to find. 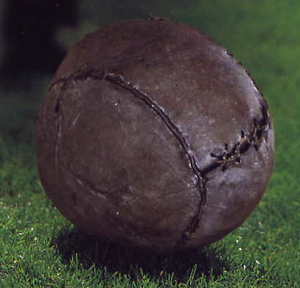 It is impossible to say how long football has been played in Britain. The oldest mention of something like it in any written text appears in the 9th century Historia Britonium, which mentions a group of youths playing ball (‘pilae ludus’ in the Latin original). William Fitzstephen’s  description of London written around 1180, also in Latin, describes crowds gathering at Carnival time to watch students and workers playing with balls, while the first similar example in the English language appears in ‘Brut’, written around 1200, where it says that men “driuen balles wide yeond the feldes” (‘drive balls over the fields’). However, we can’t be sure that any of these references are really speaking about football, and they have also been used as evidence for early golf and cricket.

The dangers of ball play would lead to many attempts to ban it over the centuries, the first known case being a 1314 decree by the Lord Mayor of London against what the French text called “rageries de grosse pelotes” (‘hustling over large balls’), and forbidding “on pain of imprisonment such game to be used in the city in the future.” The frequent reason for such decrees was that ball games were worthless, and that it would be better, as Edward III said, that man “shall in his sports use arrows or pellets or bolts.” Good archers were much more use in battle than good footballers. It was in 1409 that one such proclamation, by Henry IV, was the first known use of the term ‘foteball’ in the English language.

The same troubles were facing the Scots, where James I announced in 1424 that he “forbiddis that na man play at the fute-ball.” His descendants issued similar orders, although it’s curious that accounts from 1497 state that James IV’s groom was given money “to by fut ballis for the king.”

One of the earliest reasonably complete descriptions of what football entailed was written in Latin in late 15th century Nottinghamshire, where it is said that the game “is one in which young men, in country sport, propel a huge ball not by throwing it into the air but by striking it … with their feet.” And the first example of what would appear to have been an organised club appears in the 1420s, when the Brewer’s Company of London was hiring out its hall to what it called the “ffooteballepleyers.”

In 1508, poet Alexander Barclay gives us an early description of the ball: “they get the bladder and blowe it great and thin, with many beans or peasons put within,” in 1524 a shoe order placed by Henry VIII of all people included “1 leather pair for football” and in 1580 another poet, Philip Sidney, gives us a surprise mention of “girls at football playes.” And the oldest surviving artefact of the medieval game is a leather ball found behind a wall at Stirling Castle, which was erected sometime around 1540.

But football was still far from winning universal favour. Record of deaths playing the game continued, and in 1531 Sir Thomas Elyot famously deemed it to be “utterly abiected of all men … wherin is nothinge but beastly furie and extreme violence.” The Puritans were especially unimpressed by it, and another notable condemnation was that by Philip Stubbes in 1583, where he said it “might rather be called a friendly kinde of fight than a play or recreation; a bloody and murthering practise … Is this a Christian dealing, for one brother to mayme and hurt another, and that upon prepensed malice or set purpose?”

His words were echoed by the great academic Richard Mulcaster who felt in a book on physical education that the “footeball play … be neither civil, neither worthy the name of any traine to health.” But Mulcaster was ahead of his time, and had visions of how, with a few adaptations, football could actually be a hugely beneficial activity. His suggestion was for a “trayning maister” to be the “judge of the play.” In other words, a referee, and games should be played with “some smaller number with such overlooking, sorted into sides and standings, not meeting with their bodies so boisterously to trie their strength.” This is precisely what would eventually happen, as wild ‘mob’ football gave way to more organised games.

Football would appear to have been the term used for a game in which the ball was kicked. Up until this point, there is little evidence of football involving any handling of the ball. Such ‘rugby’ games clearly existed, but went by other names, such as the ‘cnapan’ of Wales, the ‘hurlian’ of Cornwall, the ‘hailes’ of Scotland and in the east of England, a game known as ‘campball’ or similar names. The oldest known reference was John Lydgate’s poem of 1430 that used the metaphor “lyck a large campynge balle,” and by 1751 the Norwich Mercury was reporting on game attended by no fewer than 6,000 people.

We have no detailed description of the game until Edward Moor’s of 1823, whereby “the shock of the first onset to catch the falling ball is very great, and the player who seizes it speeds home pursued by his opponents, through whom he has to make his way.” This was a carrying game, and it is highly significant that this happened in 1823, the very year that less than 100 miles away, somebody called William Webb Ellis was supposedly inventing a brand new sport at Rugby School. Whatever rugby’s true origin, it was due to the spread of the standardised code that the ‘campball’ tradition would very soon be forgotten.

16. RUSTICAL DIVERSIONS: British football in the 17th and 18th centuries