32. Coming to America: Colonial football in the United States

By 1831, America had its first sports paper in the form of The Spirit of the Times, primarily covering angling, baseball, boxing, cricket, foot racing, fox hunting, horse racing, rowing and yachting. There would be no football column until 1882. 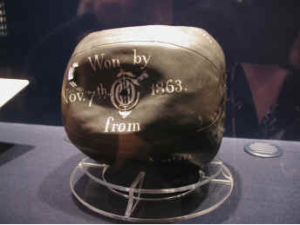 For a variety of reasons explored in this chapter, football was surprisingly slow to catch on in the United States of America. Even in the mid 19th century it was still a very low key affair, but what little evidence has survived suggests that the most widespread form was something very similar to soccer.

Although new research has shown that the Oneidas weren’t really anything like the oldest club in the country, their Boston Game would prove hugely influential when they took it to Harvard University.

Before then, football at American academia had rarely been much more structured than the brutal ‘football rushes’ in which wrestling ability was often the only skill that really mattered. It was out of this culture that the Ivy League created America’s somewhat more physical take on British football.

33. THE NOT SO ALL-AMERICAN GAME: Early soccer and rugby in the United States